When the Dallas Sidekicks professional indoor soccer team began their second season back on the field after a long eight-year hiatus, they focused in on diversifying their fan base and growing their brand within the core group of die-hard soccer fans in the market.

The team did a great job during its first year back of drawing from the nucleus of supporters who followed the team during its successful 19-year run prior to the hiatus. It also drew well from the many families whose children participated in youth soccer in the North Texas communities. However, the Sidekicks still needed to develop a core group of rabid followers who identified themselves as soccer fanatics, as it’s these fans who truly understand and appreciate the action on the field and could help bring energy and passion to the arena during the ebbs and flows of each game, not to mention the fact that they were prime candidates to eventually become loyal season ticket holders.

The Remedy worked with the Sidekicks to identify the key messaging that would be important in attracting this new type of fan, while ensuring that such a campaign would not have any unintended consequences of turning off any of the fans who supported the team the previous season and in its glory days. What The Remedy developed for the Sidekicks was its AMAZING HAPPENS HERE campaign.

The Sidekicks’ preseason marketing efforts were awash in the AMAZING HAPPENS HERE campaign. From the Sidekicks’ custom season tickets and social media graphics to print and digital advertisements and email blasts, The Remedy not only included a custom AMAZING HAPPENS HERE branding mark within all of the Sidekicks marketing and advertising elements it created, but it also featured as many action shots depicting amazing action as possible within those elements. Additionally, The Remedy developed a series of web videos featuring the Top 10 Amazing Moments from the previous season. These videos were unveiled weekly beginning ten weeks prior to the season opener, counting down to the season opener.

The campaign was a huge success and it was even carried over into the season within the team’s in-season marketing, advertising, and social media efforts. The campaign also proved effective in the stands, as the Sidekicks led the league in overall attendance and set a league record for single-game playoff attendance.

THE REMEDY BEGAN TO OVERSEE AND MANAGE THE SIDEKICKS BRAND BEGINNING IN THEIR SECOND SEASON. AS PART OF THIS PROCESS, THE REMEDY DEVELOPED A NEW BRANDING CAMPAIGN (AMAZING HAPPENS HERE) TO PROMOTE THE BRAND TO BOTH LONGTIME FANS AND FAMILIES AND INDIVIDUALS WITHIN THE COMMUNITY WHO HAD NOT YET EXPERIENCED THE SIDEKICKS BRAND OF SOCCER AND ENTERTAINMENT.

THE REMEDY SCRIPTED AND PRODUCED ALL OF THE SIDEKICKS’ HOME GAMES, INCLUDING DEVELOPING THE GAME DAY EVENT LOG AND THE LOG FOR THE TELEVISION BROADCAST OF THE GAMES, WRITING SCRIPTS FOR THE IN-ARENA HOSTESS AND PUBLIC ADDRESS ANNOUNCER, AND SCRIPTING ALL OF THE AUDIO/VISUAL ELEMENTS THAT RUN IN THE ARENA AS PART OF THE GAME DAY PRESENTATION. THE REMEDY ALSO SERVED AS GAME DAY PRODUCER FOR ALL GAMES, DIRECTING ALL GAME DAY OPERATIONS AND ENSURING THAT THOSE IN ATTENDANCE EXPERIENCED AN EXCITING ATMOSPHERE THAT LEFT FANS EAGER TO COME BACK.

THE REMEDY DESIGNED AND PRODUCED A CUSTOM WEBSITE FOR THE SIDEKICKS AND PROVIDED WEBSITE MAINTENANCE SERVICES TO THE TEAM THROUGHOUT THE SEASON. ADDITIONALLY, THE REMEDY ASSISTED THE TEAM WITH ITS SOCIAL MEDIA STRATEGY AND DEVELOPED ALL OF THE GRAPHICS THE SIDEKICKS USED IN PROMOTING THE TEAM ON FACEBOOK, TWITTER, AND INSTAGRAM.

THE REMEDY INSTITUTED AN AGGRESSIVE ELECTRONIC MARKETING CAMPAIGN FOR THE SIDEKICKS THAT PROMOTED ITS GAMES AND TICKET SPECIALS, ULTIMATELY BUILDING THE ONLINE CUSTOMER DATABASE TO A MEANINGFUL NUMBER OF POTENTIAL CUSTOMERS WHO CONTINUALLY RECEIVE SIDEKICKS NEWS AND INFORMATION ON THEIR PHONES AND IN THEIR INBOXES. 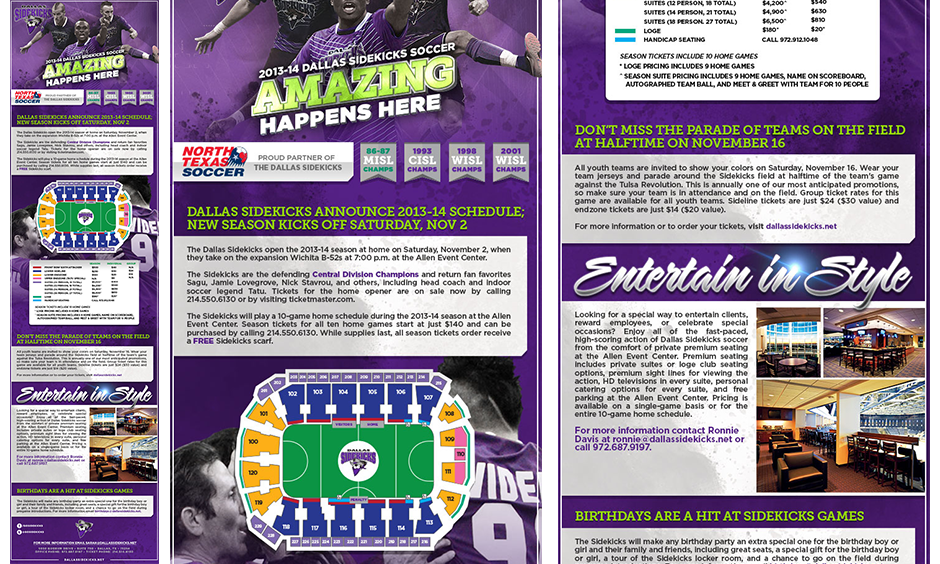 AS PART OF THE CREATIVE AND BRANDING SERVICES THE REMEDY PROVIDED TO THE SIDEKICKS, THE REMEDY DESIGNED ALL OF THE TEAM’S MARKETING COLLATERAL. THIS INCLUDED FLYERS, MARKETING POSTERS, GAME DAY POSTERS/ROSTER CARDS, TICKET BROCHURES, POCKET SCHEDULE, SCHEDULE POSTERS, TICKET VOUCHERS, POSTCARDS AND RACK CARDS, AND MORE.

THE REMEDY DESIGNED A LINE OF BRANDED MERCHANDISE FOR THE DALLAS SIDEKICKS THAT FEATURED ITEMS FOR FANS OF ALL AGES, INCLUDING T-SHIRTS, POLOS, CAPS, UNIQUE ACCESSORIES, COLLECTIBLES, AND MORE. 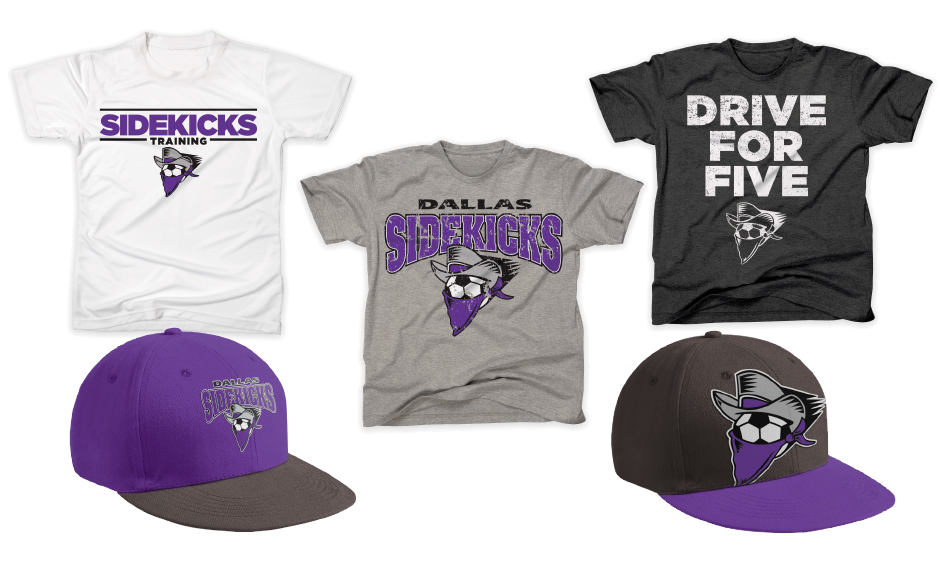 IN ADDITION TO DESIGNING THE TEAM’S MARKETING COLLATERAL, THE REMEDY DEVELOPED BRANDED CORPORATE COLLATERAL TO ASSIST IT IN ACHIEVING ITS BUSINESS OBJECTIVES.