World of Beer, a national franchise featuring hundreds of brands of beer and live entertainment at each location, launched its first-ever national music tour during the summer of 2012 and tapped The Remedy to provide marketing and public relations support. The tour featured up-and-coming Americana rocker Erica Blinn and included nine stops in Ohio, North Carolina, South Carolina, and Florida. The tour culminated with Blinnsharing the stage with Rock-and-Roll Hall of Fame member Marty Balin in Tampa and Blinnopening up for Lynyrd Skynyrd in Columbus, OH, her hometown.

The Remedy designed a poster to promote the tour and also put together a feature story about Blinn and her career designed to inspire media coverage. In all, Blinn and the World of Beer Music Tour 2012 were featured in numerous print and online calendar listings in publications that included the Orlando Sentinel, Tampa Bay Times, and Tampa Tribune, among other media outlets. Blinn was also featured in a live segment on the Tampa Bay CBS affiliate’s Studio 10 where she was interviewed and also performed two of her original songs live on the show.

THE REMEDY DEVELOPED ALL OF THE PROMOTIONAL MATERIALS FOR THE WORLD OF BEER MUSIC TOUR 2012 FEATURING ERICA BLINN, INCLUDING A PROMOTIONAL TOUR POSTER THAT WAS DISPLAYED IN WORLD OF BEER LOCATIONS THROUGHOUT THE COUNTRY, PROMOTIONAL CARDS, SOCIAL MEDIA GRAPHICS, AND A TOUR T-SHIRT. 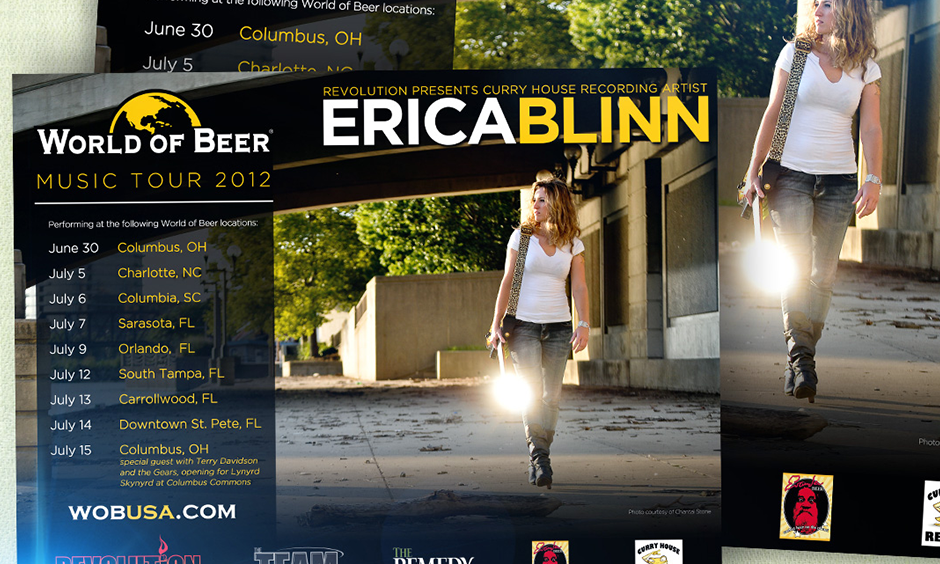