In the spring of 2013, Smiling Moose Deli, a little-known casual dining franchise-based restaurant chain based in Colorado, was set to open its newest location in Denton, TX. Smiling Moose Deli was in the early stages of expansion and a local entrepreneur purchased the rights to the Dallas-Fort Worth market, opening stores in Arlington and North Dallas. With the brand struggling for relevance and recognition in such a crowded market space, the franchisee sought out The Remedy for marketing and public relations assistance prior to opening its newest restaurant in Denton near the campus of the University of North Texas.

With a well-defined brand, but an overall lack of brand recognition within the market, The Remedy sought first and foremost to put the Smiling Moose Deli product (its food) in front of people — whether that be literally or via its advertising and marketing efforts. By allowing people to actually see delicious portrayals of the various sandwiches, salads, and soups served by Smiling Moose Deli, The Remedy was able to more quickly brand the restaurant’s menu with potential customers. And by presenting the message via various media channels, local customers were quickly made aware of their newest dining option, leading to a successful Grand Opening weekend and a strong foundation from which the restaurant was able to build and maintain its momentum.

THE REMEDY SERVED AS THE CREATIVE AGENCY FOR THE DALLAS-FORT WORTH AREA SMILING MOOSE DELI FRANCHISES. IN ADDITION TO DEVELOPING AN ADVERTISING CAMPAIGN AND AN AD BUY FOR THE COMPANY, THE REMEDY PRODUCED ALL OF THE ARTWORK FOR THE ADVERTISING CAMPAIGN, INCLUDING PRINT AND DIGITAL ADS THAT TARGETED THE VARIOUS COMMUNITIES WITHIN THE RESTAURANTS’ SERVICE AREA.

THE REMEDY DEVELOPED A SOCIAL MEDIA STRATEGY FOR THE LOCAL SMILING MOOSE DELI FRANCHISES, INCLUDING FACEBOOK AND TWITTER INITIATIVES DESIGNED TO ENGAGE EXISTING CUSTOMERS WHILE ALSO ATTRACTING NEW CUSTOMERS TO THE RESTAURANTS.

THE REMEDY BEGAN A WEEKLY ELECTRONIC MARKETING CAMPAIGN FOR SMILING MOOSE DELI THAT PROMOTED THE RESTAURANTS’ MANY FOOD AND BEVERAGE OFFERINGS AND INCLUDED EXCLUSIVE SPECIALS DESIGNED TO BOTH BOOST THE DATABASE OF SUBSCRIBERS AND ENTICE CUSTOMERS TO BRING RETURN BUSINESS TO THE RESTAURANTS ON A WEEKLY BASIS. 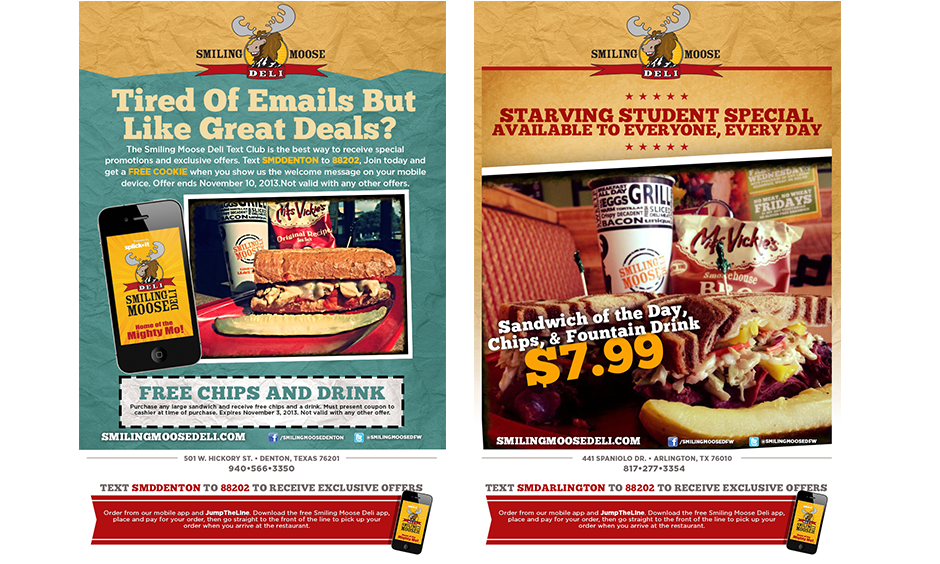 THE REMEDY DEVISED A BUSY MARKETING CALENDAR FOR SMILING MOOSE DELI THAT PUT THE RESTAURANT IN AND AMONG THE COMMUNITIES THAT THEY SERVED. FROM MOOSE BUCKS TO DOOR HANGERS TO DISCOUNT CARDS, THE REMEDY DESIGNED ALL OF THE MARKETING COLLATERAL USED BY THE RESTAURANTS TO KICK-START THEIR COMMUNITY INITIATIVES.